Schwabing is Munich’s liveliest district, some say the nerve-center of the city’s creative life.

Officially incorporated into Munich in 1890, Schwabing took on the aura of Paris and Montmartre.  Breaking with Germany’s rigid past, the area attracted writers, poets, actors, painters, and intellectuals such as Thomas Mann, Hermann Hesse, Rainer Maria Rilke, Paul Klee, and Wassily Kandinsky.

Even today, Schwabing is considered less a place than a state of mind.  Near the university, full of cafés, pizzerias, art galleries, cinemas and discos, it now draws Munich’s smart-set, the schickeria or schickimickis.  I noticed that when the schickeria meet, they don’t just offer the famous German (bone-cracking) handshake.  Instead, they give each other bussis (kisses) on both cheeks.  They say an energetic tschau instead of the more melodious Italian ciao, tschues instead of Auf Wiedersehen.  They are young, stylish, and golden.

After leaving downtown Munich, I strolled along Ludwigstrasse to the Siegestor (Victory Gate) that marks the official boundary between Munich and Schwabing.

Just steps before reaching the Siegestor, I briefly detoured left into a small square near the entrance of the Ludwig-Maximilian University called Geschwister-Scholl-Platz.

This square honors the memory of Hans and Sophie Scholl, the brother and sister resistance team that bravely tried to thwart Hitler’s advances.

By 1942, Hans and Sophie Scholl had become so disillusioned with all that Hitler had come to represent, that they founded, along with friends, the “White Rose,” a nonviolent resistance organization to fight Nazi oppression.  From June 1942 to February 1943, the Scholls and their collaborators actively and successfully distributed anti-Nazi leaflets throughout Germany, but by early 1943, their luck ran out.  On February 18, while distributing their anti-Hitler fliers, this time on the Ludwig-Maximilian University campus, they were arrested and executed four days later.  The movie Sophie Scholl: The Final Days, tells their story.

After exploring the Geschwister-Scholl Platz, I passed the Siegestor, and I continued north, where Ludwigstrasse become Leopoldstrasse to visit my cousin, Christiane, a longtime Schwabing resident and clinical psychologist. 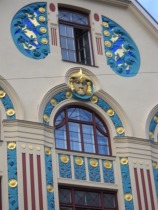