Posted on November 7, 2012 by rosemariecurteman

The highlight of my UAE souq explorations was the discovery of Bedouin silver of which I became a collector. 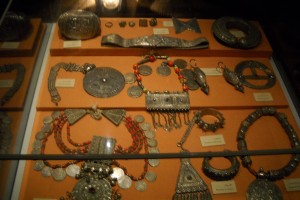 This picture shows a Bedouin Silver Collection in one of Dubai’s heritage museums. The Bedouin Silver pieces in the other pictures in this blog are from my own collection.

Historically Bedouins maintained their wealth in livestock and silver––both portable and negotiable.

The notion of investing one’s worldly goods in livestock and precious metals is an ancient one. The Greeks described the bull-calf as Italos. Since cattle were considered a form of money among early Romans, it didn’t take long for this “land of calves” to become known as Italy. As for the long-standing use of precious metals as currency, we all know that museums teem with coins from past millennia.

It was customary for a Bedouin woman to receive jewelry the day she married. A father typically used part of the prospective groom’s bridal payment to buy his daughter clothing, objects for the home, livestock, and jewelry to secure her future. Culture dictated that such silver jewelry constituted the woman’s personal riches.  She could bargain with it whenever she wanted.

By the 1970s gold had largely replaced silver as the preferred source of wealth, status, and security for women.  Because of the new emphasis on gold, Bedouin silver occasionally found its way into UAE souqs, which was the source of my own small collection.

I was drawn to this silver’s coarse beauty and to its possible history: To help secure his child’s future, a father had lovingly given it to his daughter upon her marriage. Why was it now on the market? Had its owner stumbled upon hard times?  Had she died?

I soon learned that authentic Bedouin jewelry was usually only a generation old. Traditionally, in non-settled areas of Arabia, when a woman died, her silver was melted down and new pieces were acquired for the wife who followed her. More recently, silver was melted down or simply sold in its original state, perhaps to collectors, and then replaced with gold.

By the time I came across Bedouin silver, the best pieces had already been snapped up, but still I managed to find a few. 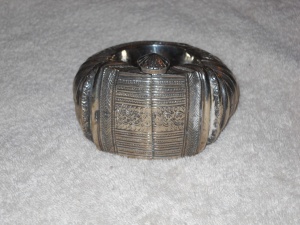 This bulky bracelet is actually an ankle bracelet.  And this necklace below, called a hirz or Qur’an box––a small receptacle that contains pieces of paper with Qur’anic verses or blessings written on them by a spiritual counselor.  Occasionally a hirz is attached to a silver chain and worn as a necklace, such as in the attached picture. 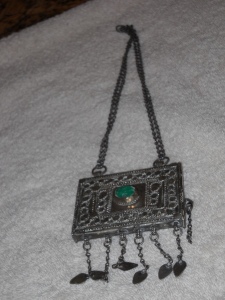 When a friend asks me to compare Bedouin silver with Mexican silver, I explain that both are similar in the sense that both cultures like to combine materials such as silver and turquoise, but different in that Mexican silver is more finely constructed with a higher grade of silver content. Bedouin silver appears more massive.

As I grew in my understanding of this art form, I learned that sterling silver, for many the benchmark of all silver, must adhere to a precisely calculated alloy: 92.5 per cent silver with the balance in a copper additive. To guarantee its quality, the best sterling is then hallmarked by an assay office.

In contrast, the silver content of Bedouin silver tends to vary from object to object; it is usually alloyed in unpredictable quantities with copper, tin and zinc; it is never hallmarked; sometimes it carries the inscription of a particular silversmith. Over time, I learned that the higher the silver content in Bedouin silver, the deeper the sheen and the softer the touch.

I will leave you with a few additional pieces of Bedouin Silver from my forays into the traditional souqs. 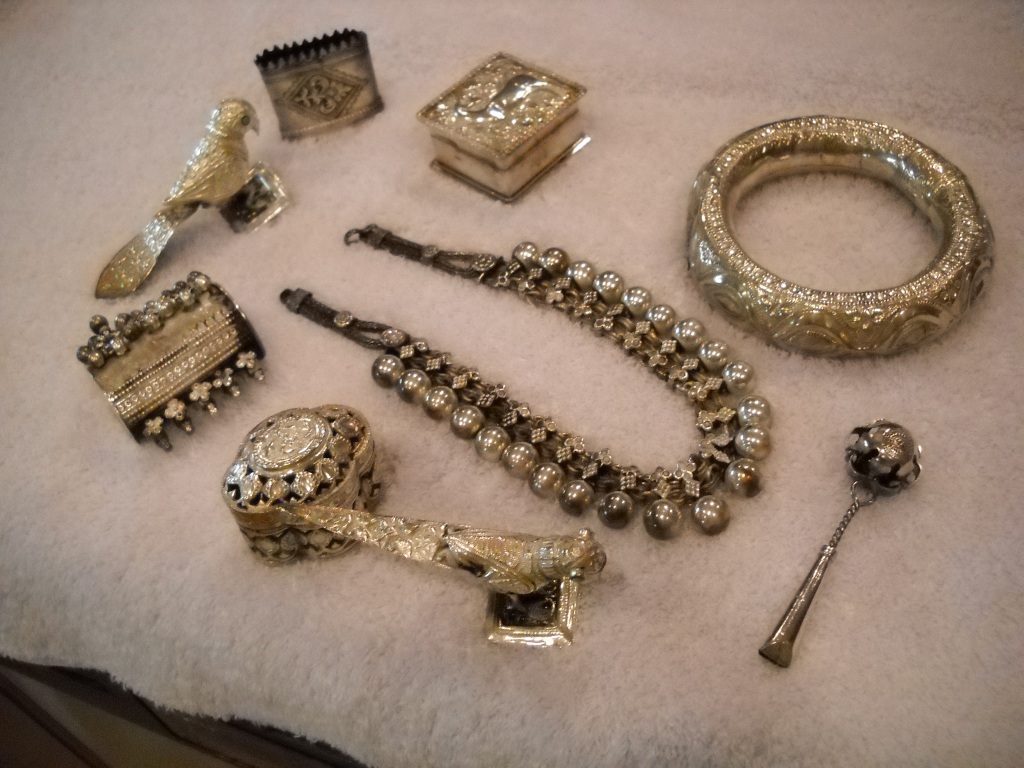