Posted on February 14, 2013 by rosemariecurteman 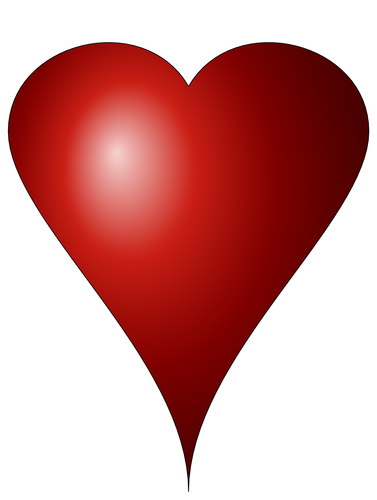 When my publisher asked me to blog about romantic places, I first had to decide what constitutes a “romantic place.”  Is such a place just about falling in love with another person or can a “romantic place” also be a conduit to something bigger—maybe even better—like an expanded consciousness, for example?

Certainly, “romantic places” can put us in the mood for intimacy, but they can also nourish our souls by something as nuanced, perhaps, as delighting our senses.  Romantic places imply that they have a pleasing quality about them, that they possess an aspect of beauty, remembering, of course, that beauty lies in the eye of the beholder.

Plotinus said that he who beholds beauty becomes beautiful.  This suggests that we should savor the good and beautiful that come our way—in whatever configuration (even in the form of “romantic places”), reveling in their subtleties—letting them infuse our being and then be a refuge from the turbulence of everyday life.

Below are two “romantic places” that have long been a balm for my spirit.

Heidelberg is hauntingly beautiful, and in the eyes of many, Germany’s most romantic town. 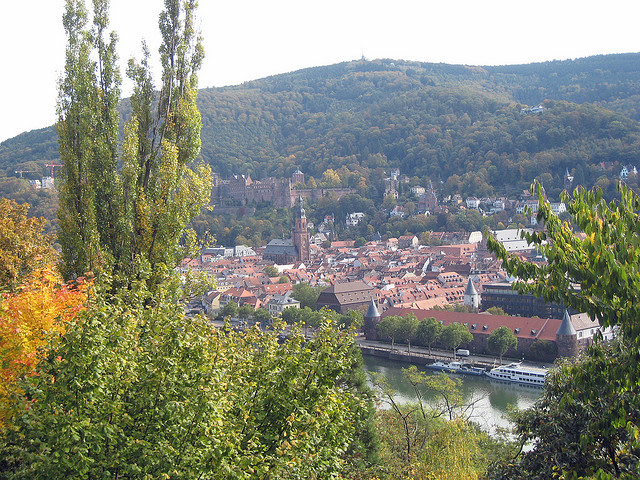 Official documentary evidence traces its origins to 1196, but archeological findings point to a much earlier start:  Heidelberg’s subdistrict, Bergheim, now in the center of the town, suggests a fifth-century beginning.

Heidelberg is home to Germany’s oldest university, which opened its doors in 1386.

Each year more than 28,000 students from around the world flock to its famed halls of learning.  This influx of students brings Heidelberg’s population to about 140,000 inhabitants and provides the town a youthful vitality.

Heidelberg has always reminded me of England’s historic Oxford with its own celebrated university.  Poets and philosophers have long rhapsodized about Heidelberg’s magnificent setting, nestled deep in the wooded terrain of the Neckar Valley.  They enshrine the town’s simplicity and naturalness, its honored past with its spires, arches windows, high vaulted ceilings and Gothic mysteries.

During the last decades of the eighteenth century and much of the nineteeth century, a new spirit began to engulf Europe:  It was the time of the French Revolution when people were consumed by social injustice. 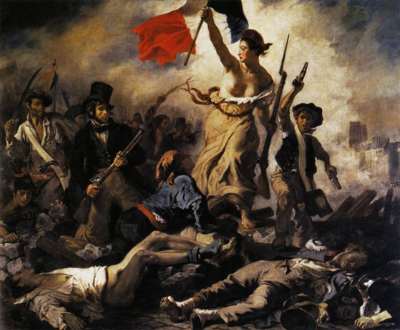 Everywhere they began to revolt against dogmatism and artificiality, seeking renewal of mind and soul in simpler environments. Heidelberg through its long history, inspiring traditions, physical beauty, and wild and lonely stretches of forests offered a venue for just that.  Eventually this new spirit became a “movement” that spilled into literature, music, and art.  Over time Heidelberg came to encapsulate all that this new mindset implied, taking on the moniker––“the cradle of German Romanticism.”

Heidelberg’s seventeen centuries of history is significant, nearly as significant in my opinion is that the city stands at all.  Already in 1944 the Allies tried to force Germany to surrender unconditionally.  When it was clear that Hitler chose to fight on, in spite of monumental losses, the Allies decided to bring Germany to her knees through saturation bombing.

Stories abound as to why Heidelberg was spared when just about every other German city of consequence was decimated.  One theory suggests that, years before, a senior officer in the bomber command had studied at the University of Heidelberg and couldn’t bear the thought of destroying his alma mater.  Probably the more likely explanation is that long before Germany surrendered, the Allies had singled out Heidelberg as a garrison base.  It had the right infrastructure, and it was drop dead gorgeous.

If you’ve read Stephen Ambrose’s Band of Brothers, you probably recall that, in the summer of 1945, as his acclaimed Easy Company of the 101 Airborne Division made its way from the blood-soaked beaches of Normandy to Hitler’s Eagle’s Nest, it paused briefly in Heidelberg.

By then Germany and much of Europe had been crippled, but not Heidelberg.  It stood intact.  Seeing this historic town whole in what was by then a nearly paralyzed Europe prompted a young American Easy Company GI, David Kenyon Webster, a Harvard English major, to say:  “When we saw all the undamaged buildings and the beautiful river promenade, where complacent civilians strolled in the sun, I was ready to stay in Heidelberg forever.  The green hills, the warm sunlight, the cool, inviting river, the mellow collegiate atmosphere—Heidelberg spelled paradise in any language.”

Today Heidelberg enjoys three spectacular landmarks that speak nostalgically of another day, giving it much of its romantic magic:

(1) The Schloss, a crumbling Gothic/ Renaissanccastle in red sandstone, and Heidelberg’s key attraction.  The Schloss is situated about 80 meters above the southern bank of the swift flowing Neckar River.

This medieval castle enjoys a tattered charm with observation terraces that afford sweeping views of Heidelberg’s Alt Stadt (Old Town) and the Heiligen Berg (Holy Mountain) across the river.  Although some of the castle is in ruin, it retains a few splendid, undamaged interior spaces, such as the iconic ballroom where, by the way, I graduated from high school.  Yes, I grew up in Heidelberg and it’s where I had my first important infatuation!  But, alas, we were destined for other paths.  He stayed in Germany; I went to college in the States.  And now I am a widow and he (who was a heavy smoker) is long deceased.

So often in life things come to us just once and then dissolve into thin air, leaving a mark . . . .

(2) Die Alte Brücke (the Old Bridge) is the city’s treasured nine-span bridge over the swift flowing Neckar River.  First mentioned in 1284, it was described by Goethe as one of the wonders of the world––not because of any particular technological innovation, but because of the vistas it offered those who walked across it.  Initially, the Alte Brücke was made of wood, which perhaps explains why over the centuries it succumbed several times to such forces of nature as water, ice and fire.  In 1788 it was finally reconstructed in stone, which proved viable until March 29, 1945, when the retreating German Wehrmacht destroyed three arches of the town’s treasured attraction.  But city fathers soon marshaled their resources, rebuilding what had been destroyed. 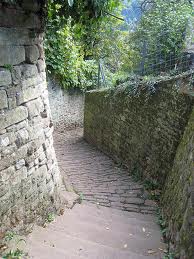 (3) The Philosophenweg (Philosopher’s Walk) on the northern bank of the Neckar River on the sunny slopes of the Heiligen Berg (Holy Mountain) affords one of Heidelberg’s grandest views of the city.  Academics have long enjoyed the serenity of this setting for walking and talking with fellow scholars.  Today it’s a favorite Heidelberg destination for all, providing sweeping panoramas for those who manage to trek up the Holy Mountain.

Heidelberg is a soulful place—deep and genuine.  It teaches and nourishes.  It’s always given me inspiring conversations, authentic friendships, and experiences that have stayed in my heart for now six glorious decades.  It’s probably my favorite place in all the world.

As if suspended between sea and sky, Taormina rests on a terraced hillside on the eastern shore of Sicily, the Mediterranean’s largest and most centrally located island.  From there, this better than twenty-three-centuries-old hill town cascades gracefully to the Ionian Sea below.

While geographically beautiful, this setting made Sicily vulnerable to hordes of foreign invaders.  For millennia other civilizations such as the Phoenicians, Greeks, Arabs, Normans, Spaniards, and French dominated, exploited, pillaged and raped the island’s indigenous people, instilling in them a deep wariness, illustrated by this ancient proverb:  “Fidarsi è bene, non fidarsi è meglio” (to trust is good, not to trust is better). These invaders all left their imprint, creating a land with a hybrid past: exotic, fiery, and highly combustible.

Taormina was founded in 358 BC, but somehow survived the tumult that the intervening centuries rained on it. Today it thrives, reveling in its distinction as Sicily’s most fashionable resort. I heard a guide say that so prized is Taormina’a reputation as Sicily’s preferred vacation destination that even the Mafia leaves it alone, because they, too, want a holiday refuge.

Taormina’s romantic qualities spring from various sources: Its climate, with May, September and October the most scrumptious months. Those are times when the tourist crunch has not yet begun or it has mercifully abated. I’ve only been there in October when the weather is “like champagne”––mild, mellow, delicious. 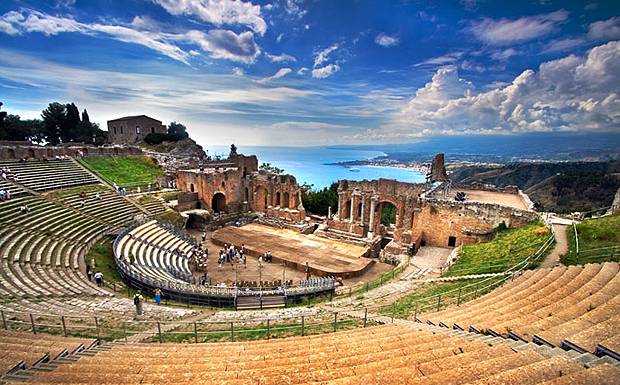 Its geographic location, providing Taormina with an exhilarating backdrop: the sea, the sky, the land with Mt. Etna and its active volcano, just 28 miles to the east.

The mountain’s lava eruptions over the centuries have left the land hugely fertile, supporting a legendary cuisine and wine industry.

Beyond these initial romantic aspects, I delight in Taormina’s simple pleasures, such as strolling along its pedestrianized and fragrant main street, Corso Umberto, that winds through the town from Port Messina to Porta Catania.

It’s here that the region’s famous after dinner promenade (the leisurely passeggiata) has been tuned to near perfection.  Sicilians are social beings.  They love “to see and be seen.” It’s almost a matter of national pride to “fare una bella figura” (to make a good appearance), and Taormina’s Corso Umberto provides them with a enticing setting along which to “strut their stuff.”  Other avenues of expression are their piazzas, markets and churches. Here they can commune with one another, giving voice to their voluminous spirits.

While ambling along the Corso, I drink in the bougainvillea-filled and jasmine-scented shrubbery before me; 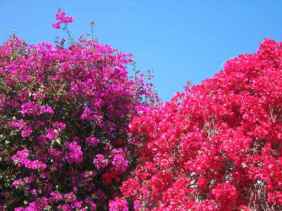 I imbibe the medieval architecture, lively cafes and boutiques that line my way. I study Taormina’s faces: They reflect a profound depth, but also a joy, an enviable ability of their owners to make the most of what they have, and to live in the moment.

As I watch the theater that is Taormina, cares fall away. The dolce vita kicks in.  My heart fills up and the world becomes young.