Posted on April 15, 2013 by rosemariecurteman

“Oxford is on the whole more attractive than Cambridge . . . and the traveler is therefore recommended to visit Cambridge first or to omit it altogether if he cannot visit both.”—Baedeker’s Great Britain (1887)

An aspect of travel that I love has to do with the fascinating people I meet along the way. 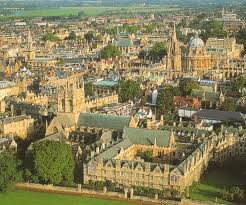 While still in Oxford, one morning I sat sipping coffee and reading The International Herald Tribune in a Starbucks just steps from the John Radcliffe Infirmary where my sister Anne lay convalescing from her massive brain hemorrhage.  Suddenly, I found myself awash in the sweet melodies of the American South.  From a table nearby, I heard lively “y’alls” and two or three “ahs” in lieu of the first person “I.”  I heard “reckon” in place of think.  (“Ah reckon we ought to be gettin’ back to class.”)  I heard “fixin,” to imply a future action, and when I couldn’t tell if I’d heard “guard” instead of “god,” or “sore” instead of “saw,” I looked up.

Before me sat three strapping young men—university students? I wondered—talking animatedly with one another.  I couldn’t resist asking the one nearest me, “Where are you from?”

“Atlanta,” he intoned in a soft Georgia drawl.  Another offered “Dallas.”  The third, “Richmond, Virginia.”

“And how about you?” the Virginia youth volleyed back to me.

“Seattle,” I answered, feeling immediate kinship with my fellow countrymen and their wonderful range of dialects.  I went on to explain that while I now lived in the Pacific Northwest, I had gone to college in the South and had developed a deep affection for it.  “I still delight in Southern American English, so I couldn’t resist saying hello when I heard you speak.”

They seemed as happy as I to have connected with another American.  We exchanged first names and outlined briefly what brought each of us to Oxford.

They were, indeed, University of Oxford students—graduate students—and two were members of its rowing team, the Oxford University Boat Club.  I told them about Anne and the ICU.

Wythe, the Dallas fellow, identified himself as a medical student.  When he heard that Anne’s endotracheal tube had been removed, he offered, “That’s a good sign.  In all likelihood, she’ll make it now.”

I then asked them to tell me about rowing.  Braden, the Virginia youth, said:  “Oxford and Cambridge have been battling against each other over four and a quarter miles on the River Thames since 1829.

“Richard [the Atlanta youth] and I row in that battle.  Wythe would row with us, but his medical rotations preclude that kind of extracurricular activity for now.”

After a few more friendly exchanges, my new acquaintances dashed to their classes, leaving me to my newspaper.  But I would run into them from time to time.

Mainly I saw Braden, the blond, six-foot-three student from Virginia, who said he needed “a caffeine buzz” in order to perform optimally.  He thought caffeine to be the best mood-altering drug in the world, far better than nicotine and alcohol.  One day he invited me to accompany him on his walk to Christ Church College, the largest of the 36 in the University of Oxford federation.

I had not yet seen this campus, which my guidebook said is considered to be the grandest of all, and which has produced 16 British prime ministers in the last 200 years.  We moved along Cornmarket Street, passing Carfax Tower, the remains of the fourteenth-century Church of Saint Martin and today a popular Oxford meeting place, just when its clock struck the quarter hour.

We crossed High Street and found ourselves arriving moments later at the Meadow Building, entrance to Christ Church.

Standing inside the Great Quad, with its golden-toned buildings, Braden told me that Cardinal Wolsey established Christ Church (originally called Cardinal’s College) in 1525 to advance humanistic studies.  Braden said its chapel is actually a cathedral, Christ Church Cathedral, the smallest in England yet a big chapel for a college. Suddenly, Braden looked at his watch and cried:  “My God! I’m late for my appointment with my tutor.  See you at Starbucks.”  We waved a hasty good-bye and then I stepped into the cathedral to rest among its pews and absorb its mesmerizing stillness.

After my rest, I walked to the adjacent water-meadows that reach to one of the Thames’s tributaries. 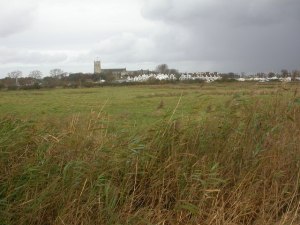 The upper meadows, those closest to the college, which owns them, are sports fields; the lower meadows are used for grazing cattle.

As I wandered in the Meadows, I thought about one of Braden’s favorite Christ Church alumni: Charles Lutwidge Dodgson (Lewis Carroll), who for 47 years was a mathematician and logician at the college, first as undergraduate, then as faculty. 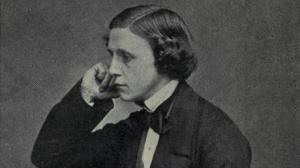 Braden liked best Carroll’s “Jabberwocky,” the nonsense poem that eventually appeared in Through the Looking Glass.  “I like Lewis’s facility at word play and fantasy,” he said. “Jabberwocky sprang out of a simple evening he spent with cousins. To while time away after dinner, they played games of verse making, and ‘Jabberwocky’ was Lewis’s contribution.”

I asked him to recite some lines, and he regaled me with two stanzas that Alice in Through the Looking-Glass had to hold up to a mirror in order to read:

Twas brillig, and the slithy toves

Did gyre and gimble in the wabe;

All mimsy were the borogoves,

And the mome raths outgrabe.

Beware the Jabberwock, my son!

The jaws that bite, the claws that catch!

Beware the Jubjub bird and shun

I didn’t need caffeine to get a buzz after hearing Carroll’s fanciful whimsy.