Posted on May 1, 2013 by rosemariecurteman

“I speak not of this college or of that, but of the University
as a whole; and gentlemen, what a whole Oxford is!”
—Lord Coleridge (1820-94)

Even though my sister Anne was mending from her massive brain hemorrhage, she still had to remain hospitalized. This gave me an excuse to stay on in Oxford:  to keep her company, but also to burnish my understanding of the place.

“Did you know that penicillin, the world’s first antibiotic, was discovered in Oxford?” Edmonda asked. Eric’s next-door neighbor, Edmonda, is a medical researcher at an Oxford hospital, and we were walking her daughter and my nephews along Warnborough Road to the neighborhood play group

She reminded me that in 1929 Alexander Fleming, a doctor and researcher at St. Mary’s Hospital in London, published a paper on a chemical called “penicillin” and its germ-killing power.  Then in 1938, three University of Oxford biomedical investigators—Howard Florey, Ernst Chain and Norman Heatley—decided to build on Fleming’s earlier findings by researching ways to grow, extract, and purify enough penicillin to enable its use as a drug.

By the time WWII erupted, their research had borne fruit.  And by 1941, when the Nazi Blitzkrieg began assaulting England, they moved penicillin research and production to the United States to protect it.

Had the three Oxford investigators not taken the initiative in 1938 to expand Fleming’s earlier discoveries, Edmonda told me, the world’s first miracle drug would not have been developed—at least not then.  “Penicillin came just at the right time—when an infection could as easily have taken the life of a wounded soldier as his wound.”

When we reached the play group, housed in an old converted church, we deposited the children, watched them settle in to class, and then wandered back to Warnborough Road.  En route, Edmonda continued her high-energy tutorial.

“Did you know that Mensa was founded here in Oxford in 1946?”

She knew that Hawkings was born in Oxford in 1942, and attended University College.  Eventually he switched to the University of Cambridge where he then held the post once occupied by Sir Isaac Newton.

After hearing about still another Oxford luminary, I decided to draw Edmonda out on the “supermen,” to borrow Cecil Rhodes’s term, who have gravitated to this small English town to prepare for greatness.

What was it about Oxford that attracts prodigies, midwifes them, and births titans? I asked.

She thought for a moment and then said:  “This university carries with it an 800-year-old mystique that many parents covet for their children.  Some would kill to have their sons and daughters admitted to a university that has graduated so many prime ministers and is home to kings and Nobel Prize winners.  Others would kill just to have their kids rub shoulders with the world’s best and brightest, or simply to make connections that could serve their offspring throughout their lives.  You know, only the most gifted get into Oxford.  It’s based on an admissions process that begins at age 12—at least in the UK—where students are sorted according to ability.  In the end, what goes on here is nothing more than the polishing of an already very bright diamond.” 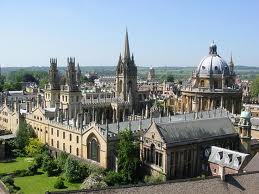