Posted on November 18, 2013 by rosemariecurteman

“The world has ten measures of beauty, and nine of these belong to Jerusalem.”

When friends ask why I keep returning to Jerusalem (I’ve been there four times), my answer always begins by mentioning its physical beauty, especially in the spring. Then the rock-strewn Judean hills surrounding the city turn a soft rain-fresh green, providing pastureland for grazing sheep.

Accenting this panorama are masses of wildflowers, with the scarlet anemone among the most prolific, creating carpets of red. 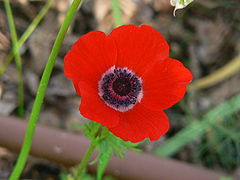 Some say the scarlet anemone denotes the ‘lilies of the field’ mentioned in the Book of Matthew (6:28)*.  The Jerusalem crowfoot, reminiscent of America’s buttercup; the sweet-smelling polyanthus narcissus; the pomegranate, noted in Deuteronomy 8; and the almond, often the first tree to bloom in winter, also contribute to what I heard a Jerusalemite call ‘the miracle of spring’.

Jerusalem: the revered but also defiled cornerstone of the three great monotheistic religions (Judaism, Christianity, and Islam) that trace their ancestry to Abraham of the Old Testament.  Emerging from the Judean hills, the city lies east of the Mediterranean Sea and west of the northern tip of the Dead Sea, the lowest point on earth.

This thrice-holy city dates back to the 19th century BCE and is mentioned in the Bible 632 times. (In fact, some scholars maintain that the city had human habitation as early as 4000 BCE.)  In Exodus 3, God refers to the land in which Jerusalem resides as a place ‘flowing with milk and honey’; but sadly this land has too often also flowed with blood and tears.  It is a city said to have been annihilated at least forty times, and today remains one of the world’s most contested places.

Jerusalem has been known by many names, among them Salem or Shalem in the time of Abraham (2000-1700 BCE), and Zion, the Mountain of God, the City of David; and in the Islamic tradition, it has long been known as Al-Quds (‘the Holy’).  Perched at 2,630 feet above sea level on the spur of a hill, it is surrounded on all sides by valleys.

The sun rises in Jerusalem over the Mount of Olives and graces first the sacred gold-leafed cupola of the Haram esh-Sharif (known in English as the Temple Mount or Mount Moriah, where Abraham nearly sacrificed his son, Isaac), a rectangular, eight-gated, tightly walled religious site in the southern part of Jerusalem’s Old City—an enclave of less than one square mile in which dwell 40,000 people. 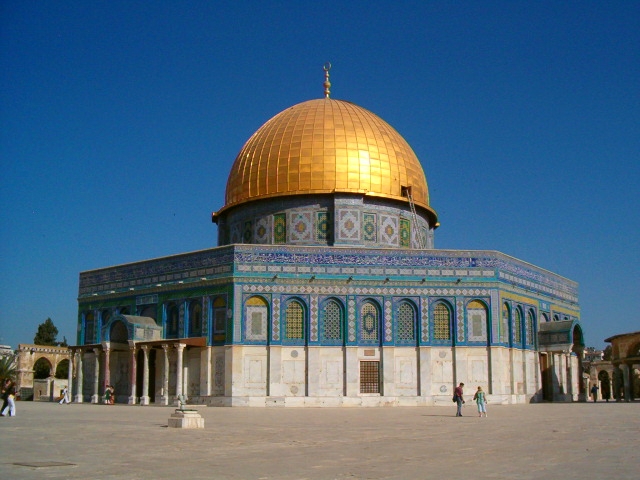 As the morning progresses, the sun anoints other Old City monuments, until midday when the sky radiates blue and the sun breathes fire.

Sunset brings long shadows and a glow so golden that one almost dares to believe that, indeed, one has reached Jerusalem’s fabled ‘threshold of heaven’.

But the city offers far more than physical beauty, I tell my inquiring friends.  For many people, a trip to Jerusalem springs from religious sentiments.  Religious Jews, certainly, are attracted to the Temple Mount, site of the Western Wall, or Wailing Wall, a remnant of their revered Solomon’s Temple, also known as ‘the First Temple’ or simply ‘the Holy Temple’. 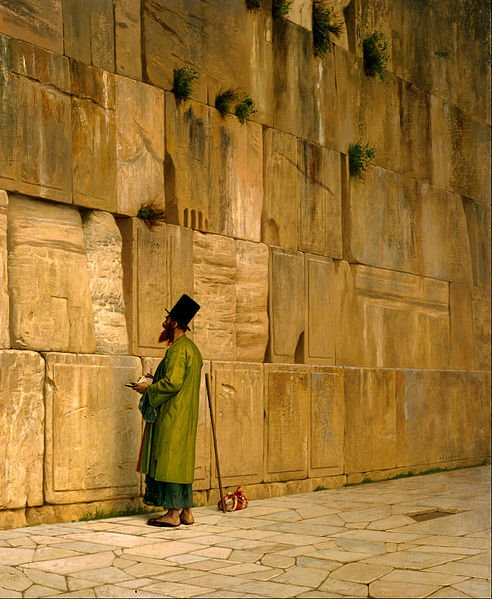 Solomon’s Temple was built c. 957 BCE and housed the Ark of the Covenant (the chest containing the two stone tablets inscribed with the Ten Commandments).  According to traditional Jewish belief, Solomon’s Temple also served as the figurative footstool of God’s presence in the tangible world. It was the center of ancient Judaism.

Jerusalem has been honored since before the time of Abraham.  The Talmud says that the Temple Mount in Jerusalem is home to the Foundation Stone (the name of the rock at the center of the Dome of the Rock), from which some say the world was created.

Through the ages other attempts have been launched to rebuild the Temple, but all have proved fruitless.  Jews speak of someday building a Third Temple, but since two Islamic shrines—the Dome of the Rock and the El-Aqsa Mosque, established in 685 CE—now rest on the Temple Mount platform, this seems an unlikely prospect.

For Christians, Jerusalem’s greatest significance lies with Jesus, who came to Jerusalem soon after his birth and made annual visits subsequently.

And for Muslims the attachment to Jerusalem stems mainly from Mohammed’s miraculous night journey when he is said to have been transported from Mecca to the Temple Mount and from there to heaven and the presence of God, before he was returned to Mecca in the morning.  According to Islamic tradition, after Mecca and Medina (in today’s Saudi Arabia), Jerusalem is the third-holiest city to Muslims.  For approximately a year, before it was permanently switched to the Ka’ba in Mecca, the qiblah for Muslims pointed toward Jerusalem.  The city’s lasting place in Islam, however, derives from Mohammed’s miraculous night journey, or Night of Ascension (c. 620 CE), an event referred to in Arabic as the Mi’raj. (Islamic scholarship suggests that this was a visionary experience, not a physical one.)

Visitors to Jerusalem who are not spiritually motivated might well be prompted by a desire to better understand the region’s history, archaeology, democracy, and politics.

Jerusalem is many things to many people.  To me, it’s about physical beauty, but even more, Jerusalem is about its three great religious traditions and its people, who for millennia have been swept up in a great and often terrifying drama—all in the name of the spirit.  They have survived in a place that has been both sublimely glorified and grievously desecrated.

In future blogs I’ll tell you a bit more of my recent visit to this part of the world.

*All Biblical quotations in this chapter come from the Holy Bible, NRSV, HarperCollins, 1989.