“Prague doesn’t let go. Either of us. This old crone has claws. One has to yield or else.”

“A jewel in the heart of Europe” is how some people describe Prague, others say it is “the Rome of the North, Kafka’s city, the city of a hundred spires.”  Praguers themselves like to say their town is “the Mother of Cities,” suggesting an era in the 14th century when Prague was the capital of the Holy Roman Empire.

Prague’s location in Central Europe has long made it a political and commercial crossroads.  The city, which today is home to about 1.3 million people, sits on the banks of the Vltava River, which flows into the Elbe, which in turn flows into the North Sea, affording even more avenues of commerce.  By the 10th century, Prague had grown larger than Paris or London.  But the ensuing centuries were not always kind to this thousand-year-old city with its treasure-trove of Gothic and Baroque architectural gems.  World War II, for example, brought untold misery to the people of Czech lands, some of which I’ll touch on later.  A silver lining is that Prague was spared the saturation bombing that annihilated so many other European cities of that era.  Those of us who visit Prague today are the lucky beneficiaries of one of Europe’s best-preserved cities, which attracts about 8.5 million visitors annually. Our local guide was proud to tell us that Prague is the fifth most visited European city after London, Paris, Istanbul and Rome.

Prague’s most sought-out tourist sites are:

the Prague Castle, a hilltop fortress in the Gothic style, looming above the Vltava River and crowned by St. Vitus Cathedral, the largest church in the Czech Republic and the land’s spiritual hub.  The Cathedral’s cornerstone was laid in 1344, and construction was finally completed in 1929.  The premise of Prague Castle consists of a complex of churches, towers, halls and palaces from every period of the land’s history. Our guide referred to it as “the cultural and historical heart of the Czech Republic.”

Squeezed in among these castle sights is the Golden Lane, a colorful series of artisans’ cottages along the inside of the castle wall, built in the late 16th century for the castle’s guards and gunners.

A century later goldsmiths made this their home.  More recently, celebrated writers, such as Franz Kafka (1883-1924), author of two important 20th century novels, The Trial and The Castle, settled in this quaint neighborhood.  Today the current president of the Czech Republic has his office in the castle area.

The nearby Old Town Square is also a major attraction, dating back to about the 11th century when it was first a marketplace. In 1338 King John of Luxembourg granted Prague’s burghers permission to form a town council.  This prompted the building of the Old Town Hall with its distinctive trapezoidal tower.  A point of fascination in the Old Town Hall is the Astronomical Clock; its 600th birthday was commemorated in 2010.  Our guide referred to it as a giant cuckoo clock, that not only tells the time, but also shows the movements of the sun and moon through the signs of the zodiac and the planets around the earth. 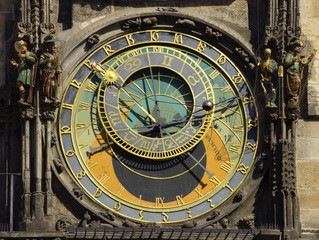 As we strolled through Old Town, we learned how in the distant past, town fathers dealt with dissension.  They simply hurled dissidents from high story windows! It was called defenestration.  The first recorded instance occurred in 1419 during a struggle between Protestants and Catholics.

Some say that the Charles Bridge, built between 1357 and 1402, is Prague’s quintessential landmark.  It spans 1,700-feet and is supported by 16 graceful arches.  Among its celebrated features are 30 statues, some with religious motifs that were installed with the hope that they would lead

burghers back to the church.  Today all the statues are copies, with the originals safeguarded in museums throughout the city.  The bridge is typically mobbed with artists, tourists and instrumental groups.

Prague’s long history produced a diverse array of personalities, among them Rudolf II (1552-1612), who carried such titles as Holy Roman Emperor (1576-1612), King of Hungary and Croatia (as Rudolph I, (1572-1608), King of Bohemia (1575-1608/1611) and Archduke of Austria (1576-1608).  He was a member of the House of Hapsburg and aficionado of the Renaissance, which strove not to match the works of antiquity, but to equal and possibly top them.  To the neglect of politics, Rudolf II liked above all else collecting art and studying the sciences. He had no qualms about transporting large quantities of Italian art across the Alps and inviting the age’s most adept thought leaders into his realm.  These thought leaders included alchemists and goldsmiths, who were charged with enhancing Rudolf’s quest for magical or medicinal potions that would enhance life.  He was a “connoisseur of the bizarre,” our guide said, citing, as a case in point, the vegetable portrait of himself by Giuseppe Arcimboldo (1590).

The Czech statesman, writer, and former dissident Václav Havel (October 5, 1936-December 18, 2011) is another celebrated figure from the past.  He served as the last President of Czechoslovakia from 1989 until the dissolution of Czechoslovakia in 1992 and then as the first President of the Czech Republic from 1993 to 2003.  Havel is known for his plays, essays, and memoirs.  On November 19, 2014, a bust of Havel, created by Czech-American artist Lubomir Janecka, was unveiled at the U.S. Congress, commemorating the 25 year anniversary of the Velvet Revolution.  Havel is the fourth European ever to be honored by having a bust of himself in the U.S. Congress, after Winston Churchill, Raoul Wallenberg and Lajos Kossuth.

An important part of Prague’s past is the Old Jewish Cemetery, a memorial to the once sizeable Jewish community in Prague.  Before viewing the Cemetery itself, our guide touched on the history of Jews in Prague that dates back to the 9th century, when Jewish merchants traded in the city’s commercial areas. At that time Jews were free to live in any of Prague’s neighborhoods, but this changed after 1215 and the Lateran Council, when the Pope declared that Jews must be separated from Christians.  After that, Jews could no longer own property or belong to guilds––they even had to wear identifying marks on their clothing.

By the early 13th century, Prague’s Old Town had become the city’s commercial district. It was here that the Jewish Quarter came to be, in time becoming an enclosed ghetto with about 11,000 residents.  The persecution of Jews eased in the 19th century into the 1930s until Hitler annexed the Czech Sudentenland.  Of the 55,000 Jews living in Prague in 1939 just 10,000 survived the Holocaust.

For over 300 years the Jewish cemetery, founded in 1478, and enlarged only slightly through the centuries, was the only permitted burial ground for Jews.

Because of this lack of space, people had to be buried on top of each other, sometimes 12 layers deep. Today over 12,000 gravestones are visible, but it’s believed that about 85,000 dead are buried there.

Near the cemetery is Pinkas Synagogue, today used as a memorial to the victims of the Holocaust.  The main attraction of this synagogue are its interior walls, inscribed with the handwritten names of 77,297 Czech Jews sent to their death at Auschwitz and other camps.  Most died without grave markers, but are remembered in this synagogue.

If shopping in Prague is of interest, consider these traditional products:  puppets, glass, crystal, and garnets.

In my family, we’ve long sought out Czech glass and crystal.  From vast, ornamental vases to fragile glass figurines, they’re usually ranked among the finest in the world.  If you’re wondering why glass and crystal gained prominence in Czech lands, it’s because Prague and its environs were for hundreds of years the seat of royalty, who commanded such excellence.

While Czech glass comes in four main color groups––red, blue, green and brown, I’ve always gravitated toward red.  Below are a few pieces from my collection.

Traditionally, soups in the Czech Republic have served either as a first course or as a meal unto themselves.  They’re believed to be a cost-effective way to feed several mouths or just one.  When our local guide discussed the Czech cuisine, she told us that traditionally the bountifulness of a soup was gauged in part by the number of beads of fat floating on top of the soup, the more beads, the greater the host’s largess.  While Czechs like fat, and soup broths made with meat, they also appreciate soups made with water and root vegetables, such as potatoes, carrots, parsnip, celery roots, and potatoes.

Below is a basic soup recipe from Peter Trnka’s The Best of Czech Cooking.  I modify it with a medley of other green vegetables such as kale, mustard greens, zucchini, or Swiss chard.

This entry was posted in Uncategorized. Bookmark the permalink.